Verdicts can be passed by various authorities in Denmark. The first authority to pass a verdict in a paternity and child support suit was the stiftamt (county administration, later called statsamt). A verdict passed by the stiftamt is called a resolution. Below is a resolution from Aalborg Stiftamt from 27 February 1798.1 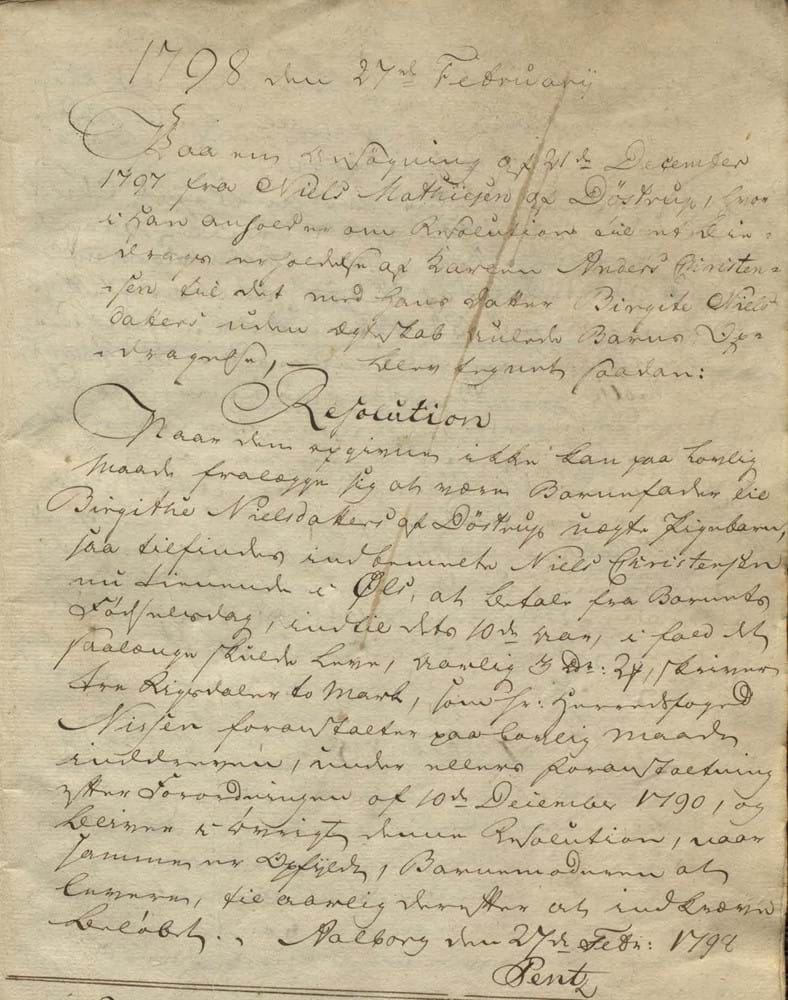 The record says the following:

Upon request dated 21 December 1797 from Niels Mathiesen of Døstrup, wherein he asks for a resolution regarding support from the worker Anders Christensen to the upbringing of the child procreated out of wedlock with his daughter Birgite Nielsdatter, the following was decided:
Resolution
When the alleged [father of the child] cannot lawfully deny being the father of the illegitimate daughter of Birgithe Nielsdatter, so the mentioned Niels Christensen, who now serves in Øls, is obliged to pay 3 rigsdaler 2 mark annually, written three rigsdaler two mark, from the child's birthday until it turns ten (if it lives that long), which Hundred Bailiff Nissen shall lawfully collect, or take actions in accordance with order of 10 December 1790, and when the resolution is fulfilled, it shall be given to the mother of the child to be used to collect the money every year. Aalborg 27 February 1798. Pentz. [The name of the father of the child is first written Anders Christensen and then Niels Christensen. Other records must be used to determine which is correct.]

When I see a reference to a law, I always want to see what that law says. The mentioned order dated 10 December 1790 says that execution can be levied in the belongings of the child's father, if he did not pay the child support, and if that did not suffice, the father had to be imprisoned.2