New Digital Collection: Crew Lists for Ships and Other Records Regarding the Danish Colony Tranquebar

The Danish National Archives have published new images of records, many of which are from the Asian Company (Asiatisk Kompagni), which was the royal shipping company in charge of the trade between Denmark and the Danish colonies in Asia. Tranquebar, now Tarangambadi in India, was a Danish colony. The new digital collection from the Asian Company includes crew lists from ships sailing between Denmark, China, and Tranquebar 1723-1833.

The crew lists were recorded in books at the office in Copenhagen before the departure, and some details were added to list during the trip and after the return. One crew list was made for each trip and provides the following information:

The crew lists are not indexed in a database, but the books for years 1798-1833 contain a handwritten alphabetical index of names. The images of the index have been filed in a separate digital collection. If your ancestor was not from that time, it is best if you know approximately when the person was employed to find him in these lists. 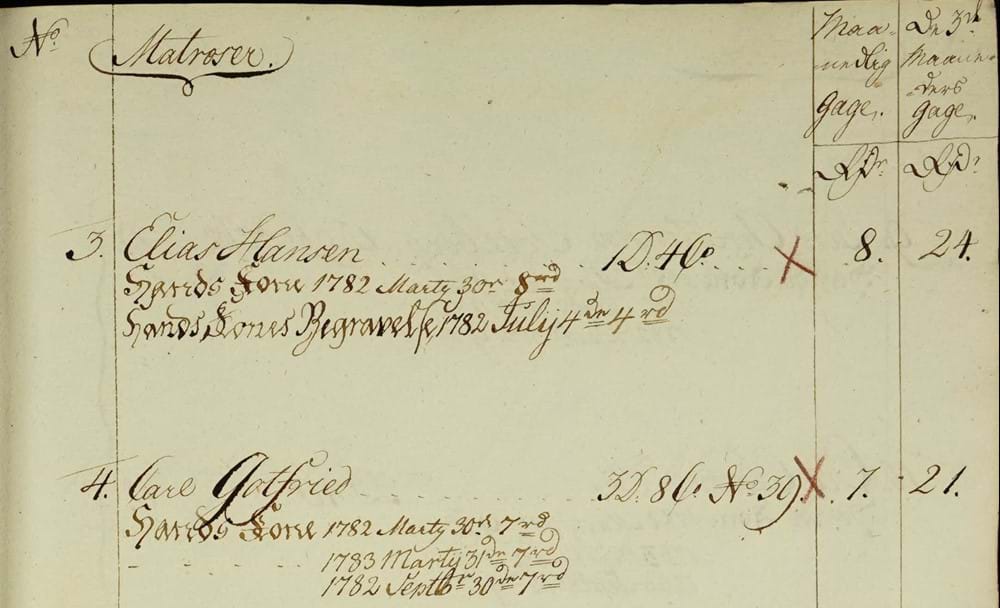 In 1781, the ship Mars sailed to Tranquebar and China. A part of the crew list is shown above. The image is a link, and if you follow it, you can explore the entire crew list.

The image shows the listing for the seaman Elias Hansen. A payment was made to his wife on 30 March 1782. Furthermore, it says that the company paid for her funeral on 4 July 1782. The two notes not only provide evidence that Elias was married, but they also suggest that there ought to be a burial record for his wife recorded in the parish register between 30 March and 4 July 1782 in the parish in Denmark where the couple resided. A probate record for her is likely to name their children and other relatives. Additionally, if the couple had children, Elias likely remarried shortly after his return to Denmark.

The example shows that the crew lists can provide many clues for family historians, so they are worth examining if your ancestor was involved in the shipping done by the Asian company.

Other Imaged Records for the Danish Colony Tranquebar

The Danish National Archives have imaged quite a lot of records regarding the Danish colony Tranquebar. The easiest records to start using are these:

A Historical Map of the Danish Colony Tranquebar

The image at the top of the post shows a map of the Danish colony Tranquebar, drawn by L. Parmentier in 1744. Today maps are usually drawn with north at the top of the map, but that was not always so. This map has north to the right side of the map, so that the shore is at the bottom edge of the map. The map not only shows villages around the town of Tranquebar, but the legend on the map, which is written in French, reveals a bit about the work done in the colony. For instance, it says that there was a salt factory where salt was made from the heat of the sun.

Only a Fraction of the Tranquebar Records are Imaged

Although, the collection of imaged records regarding the Danish colony Tranquebar has grown considerably with the recent addition, many records are still not imaged. Furthermore, some records require at least intermediate knowledge of Danish to be fully understood. If you need help with the research of your ancestors, feel free to contact me for a dialogue about the options and for an estimate of the time needed.

What does the Danish word skifte mean?

Sometimes indexes do not provide the results we are looking for, but that does not necessarily mean that the ancestor is not in the index.

The parish clerk for Egtved Parish, Denmark, wrote short biographies of deceased parishioners in the church book from 1767-1789.