Journals are a cornerstone of public administration in Denmark, even today, although they are now digital. In many ways they resemble the inward correspondence registers used in public administration in many other countries today. The journal contains an overview of the letters in each case, whereas the original letters are filed in the journal case file. In its simplest form, a journal is a chronological list of incoming letters, each designated a number. However, many journals are divided into case groups. Most often only the first incoming letter of a case is designated a number, and then subsequent incoming letters are listed under the first case number. We will get to an example below.

Other Danish Words to Know When Researching Journalsager

In this example we will look at a case about alimentationsbidrag (alimony and child support) between Peter Dahl and his wife Ane Catrine Rasmusdatter in 1833. The case demonstrates a typical flow of letters being sent between various authorities and the records kept in the county's collection at the Danish National Archives.

The handwritten index of names in the journal for Præstø County is sorted semi-alphabetically by surname. Both the husband's and the wife's name are in the index, as shown in the images below. The index refers to case number 1586. The case numbers pertain to a specific year, so you must note the year as part of the case number. This case has case number 1586/1833.

The journal record is shown below. The first column is the case number, the second is a description of the case and an abstract of the letter which initiated the case (letter a). The third column lists additional incoming letters, in this case only one (letter b). The last column lists outgoing letters with references to the copy book.

Letters a and b are found in the journal case file (see link in the source reference). Letter a is a letter from the district explaining that Ane Catrine Rasmusdatter of Sierslev and her three children were abandoned the husband Peter Dahl and the district asks that Peter Dahl be obligated to pay alimony and child support to them. This is the wife's version of the case. Letter b is from the Copenhagen Magistrate and that reports the husband Peter Dahl's side of the story. He claimed that he had sent money to his family and that he intended to return from Copenhagen to either take the family to Copenhagen with him or make other arrangements with his wife. That is the last letter in the case, so it seems that the case ended there, but of course we must correlate with information from other sources, for instance whether the wife lived alone with the children at the 1834 census.

Some case files contain many documents, including documents written by the parties themselves. Bastardy case files can be particularly extensive - and thus a rewarding find for genealogists.

The two outgoing letters were kept by the recipient. In general, I recommend that you seek out original letters in the collections of the recipient, but some letters were simply cover letters with little information, and most often attached letters being forwarded to other authorities were returned to the county with the response from the other authority. Therefore, the copy book records sometimes suffice. Below are the copy book records referenced in the journal for case 1586/1833. 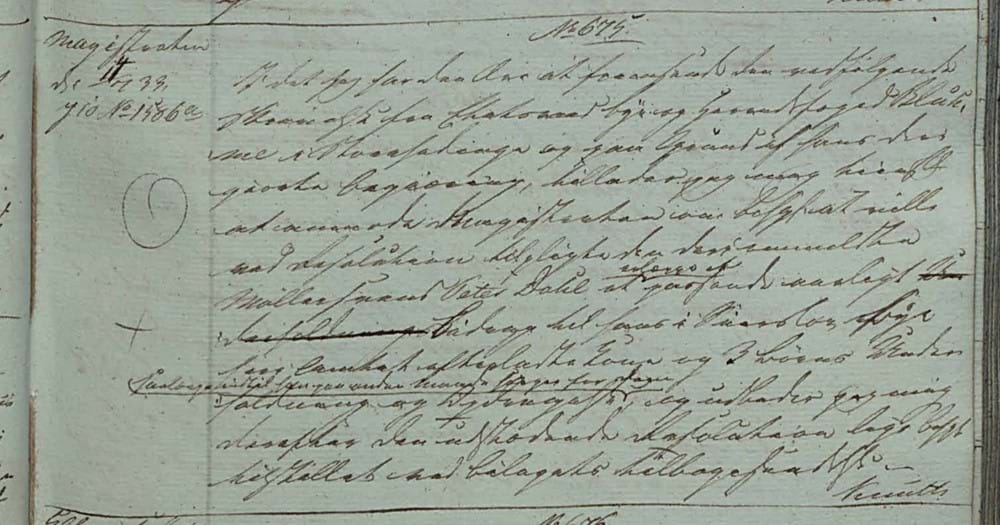 The first is a copy of a letter asking the Copenhagen Magistrate to handle the case and return their resolution to the county. The Copenhagen Magistrate was involved in the case because Peter Dahl had moved to Copenhagen. The second is a copy of a cover letter to official Bluhme, who was the person who had first contacted the county about the case; he was the sheriff for Stevns-Faxe Districts where the wife resided. Bluhme was asked to tell Ane Catrine Rasmusdatter what her husband Peter Dahl had responded.

Most of the information is in the incoming letters, so they should be read carefully. Beware that if a letter was sent to a private person from the county and that letter was not returned to the county, it probably no longer exists, and then you will have to make do with the abstract/copy in the copy book.

The counties were involved in most family law journal cases, which is the case type most relevant for genealogists. Many county journals and handwritten name indexes thereto have been imaged and are available at Arkivalieronline. [Link] Copy books and case files have typically not been imaged but can be accessed at one of the departments of the Danish national Archives.

One of my professional services is to photograph case files identified by clients in an online journal. If the journal is not online, I can access and photograph it at the archives. Privacy rules apply, and the rule of thumb is that cases are accessible 75 years after the case was handled. If a relevant case is more recent than that, I can assist you with the needed application for access.

What does the Danish word udvandring mean?

What does the Danish word tegnelse mean?

What does the Danish word supplik mean?