For most areas of Denmark proper, cadastral maps from about year 1810 have been kept and the names of tenants were recorded for each lot in these historical Danish cadastral maps. Traditionally, Danish farmland and rural farms and houses were primarily owned by the King, the church, manors and main farms and the land was cultivated jointly by the farmers. Beginning in the 1700s, udskiftningen (the redistribution of land) began. Each tenant was assigned a piece of land for which he was responsible. In some areas of Denmark, each lot was one square piece of land. However, acknowledging that all land was not of equally good quality, the redistribution often meant that a lot consisted of several separate pieces of land. Even though the pieces of land could lie at opposite ends of the ejerlav (real property area), the lot was only assigned one number. In this post I demonstrate how to make sure that you have located all parts of your ancestor's lot in a cadastral map.

In yesterday's post I introduced the website Historiske kort på Nettet (historical maps online), which contains various types of historical maps and some related record books. The website does not have an English version, so if you have not read that post, I recommend that you do so. In that post I describe the basic structure of that website.

You need to know the name of the ejerlav to find a lot. Lot numbers were assigned within each ejerlav, so that a lot with number one existed in all ejerlav. If a lot was later subdivided, letters were added, such as lot 1a and 1b. In this post I will use lot number 4 in the ejerlav Dalby By, Dalby as my example. At Historiske kort på Nettet in the first tab called Matrikelkort (cadastral maps), type Dalby to get a list of options and select the relevant one. The search result is shown below. 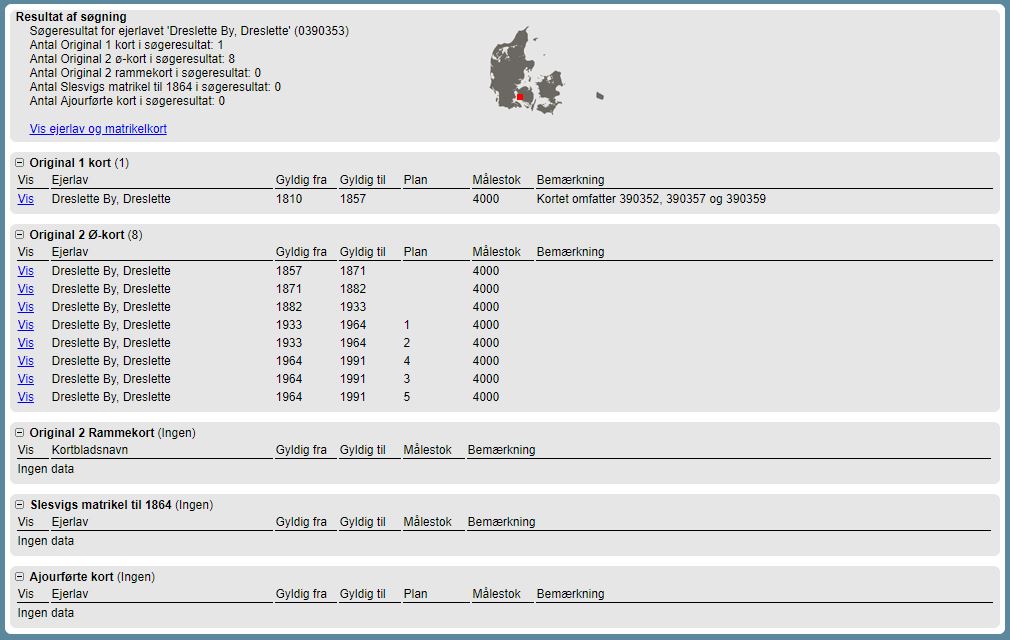 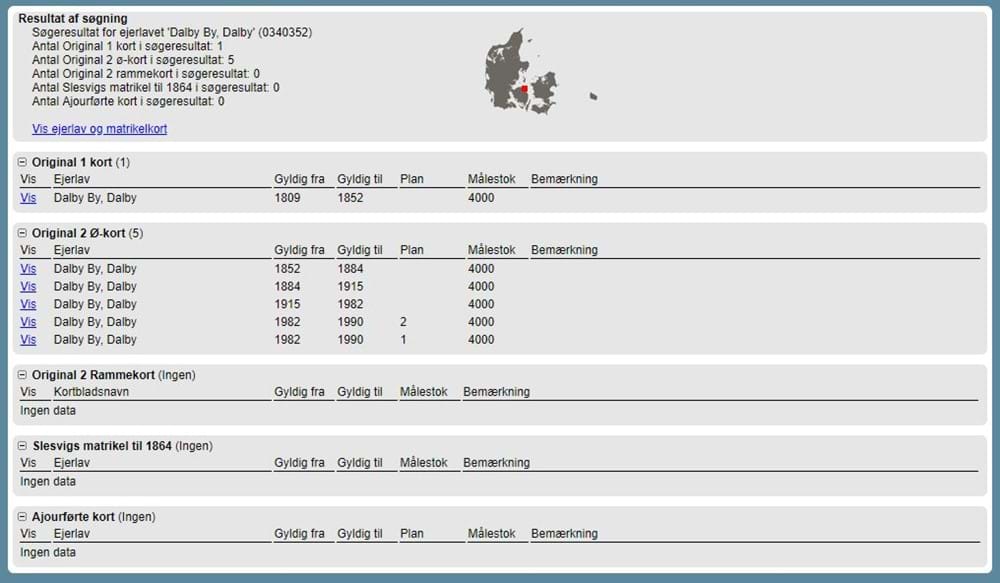 Five types of cadastral maps are being digitized, but not all types exists for all areas. The types are:

Look at the Original 2 map from 1852 for Dalby by clicking the link Vis  (show) on the line of the map )this opens the image in a new window). This map only covers one ejerlav. Notice that north is not directly upwards in this map. I found a lot numbered 4 in the town itself and the map shows a farm at that lot, as shown in the top right corner of the snippet in the image at the top of the blog post. However, the bottom of the snippet shows another piece of land which is also assigned number 4 and there may be more outside the snippet. I could look at the map piece by piece to find all the parts of lot number 4, but there is a more foolproof way.

We need to use a parish record book, which you can find at Historiske kort på Nettet under the last tab Protokoller (record books). Two types of records are filed here:

Search for Dalby and select the relevant suggestion from the list. Download the sogneprotokol by clicking the link named Hent (get); it is a PDF containing the scanned book. The headings translate as follows from left to right:

The image above shows a part of folio 2 in the sogneprotokol for Dalby Parish. Lot 4 of Dalby Town is listed at page 5-6 in the sogneprotokol. If you are up for trying to translate the description, start by reading that (to the far right on page 5): "Gaardsplads med Tofte nordøst i Byen, en Hovedlod nordøst for Byen, en Udlod sydvestlig i Marken og en Englod midt i Byen østen for Gaden. Til denne Gaard hører desuden en Femtedel i den under Matricul No 46 anførte Tørvelod." It describes where each part of the lot lies. The translation of this provided by Google Translate is not entirely correct, but you can at least see the directions in that translation: [A] northeast of the city, [B] northeast of the city, [C] southwest in the field, [D] in the middle of the city east of the street, and one fifth of no. 46. The column listing "the name of the land or other designation" lists each of the four parts A to D, so by looking in that column you can also see how many parts you need to find to have them all. I have found the four parts of lot 4 and highlighted them in the image below. Lot number 46 is a peat lot. Peat lots were shared by several lots and as the description says, lot 4 had rights to one fifth of that lot. You can download a zip file with the entire map as a JPG image file by choosing the menu item Kopi (copy) and JPG (hele kortet) (the entire map). 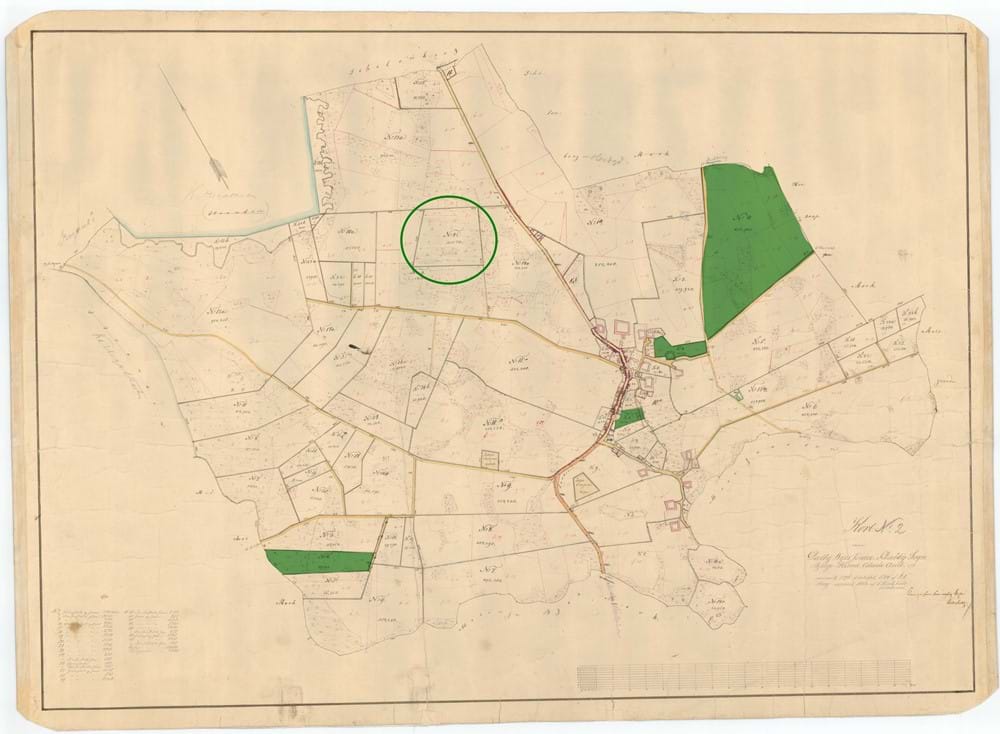 I hope you can now easily find all the pieces of your ancestor's land in one of these historical maps.

What does the Danish word retsbetjent mean?

What does the Danish word pantebrev mean?

What does the Danish word ejerlav mean?