Did Your Ancestor Own Real Property in Denmark? Part 2

My fifth great-grandfather Mads Rasmussen (1759-1836) owned the farm Knudstrup in Sanderum Parish. The snippet above shows the family in the 1801 census, where it says that the family lived at Knustrup (an alternative spelling for Knudstrup) and that Rasmus was the owner of the property. The record does not reveal the cadastral id number (also called lot number).

Finding the Lot Number in the Parish Hartkorn Register

In part one, I introduced a website with historical maps: https://hkpn.gst.dk (HKPN). The site also holds records called Sogneprotokoller (parish hartkorn registers) and Hartkornsekstrakter (hartkorn extracts). Hartkorn was a measurement of the value of the land and it was used to determine the amount of taxes to be paid by the owner. Both types of records contain the names of the owners of the land. The Hartkornsekstrakt covers the entire Herred (hundred), so I prefer to start with the Sogneprotokol. At the site HKPN, go to last tab called Protokoller (registers). Type the name of the parish, in this case Sanderum. The results are a list of pdf files, which can be downloaded for free. Click the word Hent in the first column on the line with the Sogneprotokol to download the file. 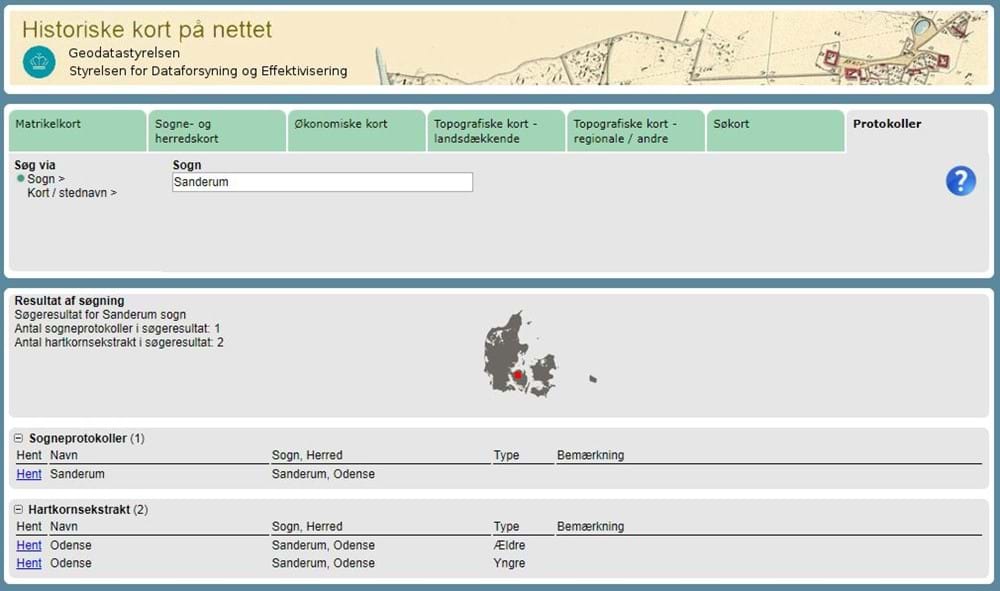 The lots are sorted by town and then by lot number. By scrolling down, I found Knudstrupgaard and Mads Rasmussen on page 23 (pdf page number). Part of the entry is shown in the snippet below, but I encourage you to download to file, so you are better able to read what it says.

Apart from the name of the owner, the register also contains the lot number. It is written in the third to last column named Nye Matriculs Nummer (new cadastral identification number). Knudstrup thus lay at lot number 3. Now we could go to the public information server, as in part one, and try to find the address, however, I am certain that all the original lots have later been subdivided, so we would not be able to look up lot number 3. Instead we need to look at the old maps to see the changes which were made to the lot. To find the right map, we must know the name of the ejerlav (property area). The census records typically reveal the name of the ejerlav, because it is most often the name of the town. However, sometimes the census taker listed a farm under its own name and not necessarily under a specific town. In that case, no easy way exists for finding the name of the right ejerlav. For the sake of simplicity, I will reveal that the name of the ejerlav is Holmstrup By, Sanderum. (In the next part of this tutorial, I will show how I found out.) Now we will find the old maps, following the same procedure as in part one.

Finding the Lot on an Old Map

At the website HKPN, choose the first tab named Matrikelkort and type the name of the ejerlav. Open the map valid from 1810 to 1852 by clicking Vis on that line. Find Knudstrup, lot no. 3, on the map. This map is a bit of a mess, but eventually I found the place in the upper right-hand side. The snippet below shows the place on that map. 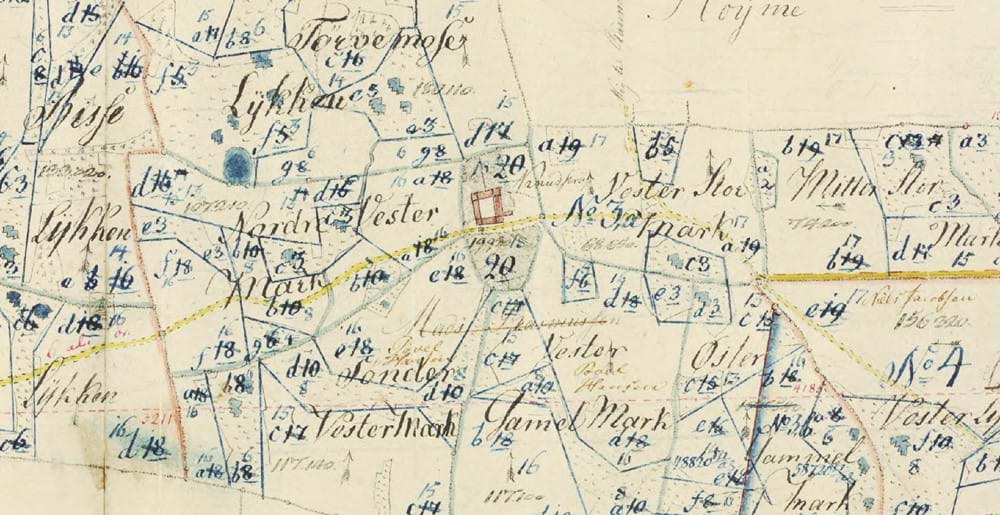 The name of the farm and its owner is written on the map. The name Mads Rasmussen has been crossed out, and the name Poul Hansen was written instead. The maps were updated, and this change shows that the next owner was Poul Hansen. I already knew that, because Poul was Mads’ son-in-law, but sometimes the maps reveal details which you did not already know. Since this map is a mess, I chose to look at the next map, the one valid from 1852 to 1942. This time it was easy to find Knudstrup. The snippet below shows the place on that map. 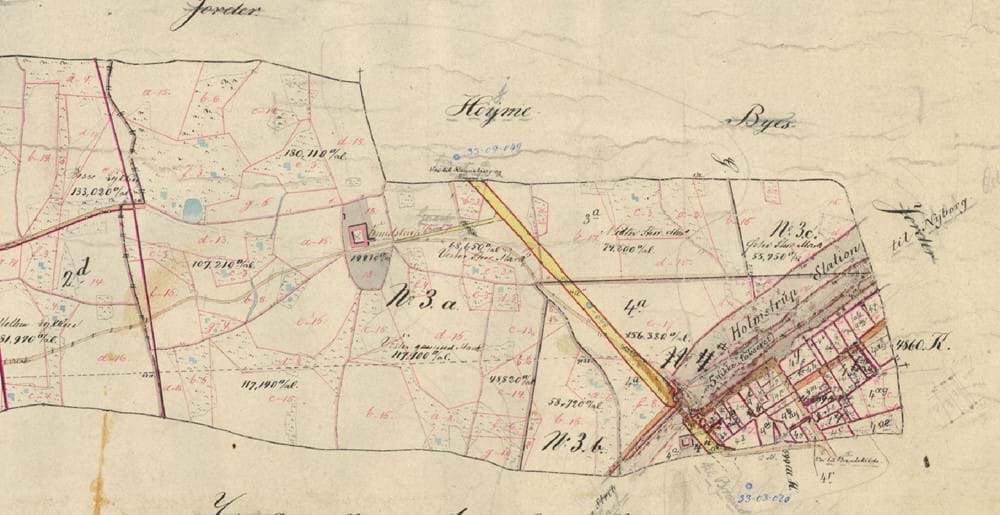 That map shows that the lot was subdivided into lots 3a, 3b and 3c and that the farm lies at lot 3a. The oldest farms and houses often lie at the lot with the letter a, however, since this is not always the case, one must examine the maps before drawing that conclusion. We now know that the lot number is 3a and then we can look it up in the public information server by following the same procedure as in part one.

Finding the Lot in the Public Information Server

Go to the public information server at http://www.ois.dk and click the orange box called Via matrikelnummer in the menu on the left. Type the name of the municipality (see part one for instructions on how to find that), the ejerlav and the lot number, in this case: Odense - Holmstrup - 3a. Click Søg and the details for this lot are shown, as copied below.

If you would like to know where in Denmark, this place lies, you can see that on a map provided by the public information server. In the menu on the left, expand the item named Kort (map) and click the item named Skærmkort (screen map). Today’s map then appears on the right. You can zoom and navigate as you please.

The next part of this tutorial will be about finding the name of the ejerlav, when it is not evident from the census or other identified records. Thereafter I will explore records, which reveal the ownership history (real property registers and deed and mortgage records), and record which reveal the number and size of each building and the building materials (fire insurance records). I particularly love looking at the fire insurance records, because they are so detailed that you are almost able to draw the building from the description. So, I hope you will come back to learn more.

What does the Danish word retsbetjent mean?

What does the Danish word pantebrev mean?

What does the Danish word ejerlav mean?