Brandstyr was an extraordinary tax collected when needed, meaning when a fire had caused so much damage to a town or public building that the place needed financial support from the rest of the country to rebuild it. When fire tax was needed, the King of Denmark passed a law, which detailed how much was needed and who had to pay.

Sources about Fire Taxes in Denmark and the Information Therein

Beware that the fire taxes were imposed on the entire country and not only on the inhabitants of the town, which the fire had destroyed. After a law about an extraordinary tax was passed, local authorities held censuses, which list those who had to pay the tax. Some inhabitants may have been exempt from paying specific taxes, depending on the law about that tax. The censuses were usually not sent to the central authorities, and not all of them have been kept. Most tax censuses are filed in the collections of the county.

Tax censuses were not written on pre-printed schedules, so the level of detail varies from place to place. Below is an example of a census from Faaborg Market Town.1 It lists only the head of household and the amount to be paid, which is quite typical of tax censuses. In addition to information about the due amounts, some tax censuses include a separate list of inhabitants, which were unable to pay the tax due to poverty. Such lists often contain details about the reason for the exemption, for instance how many children the head of household had, or that he/she was widowed. 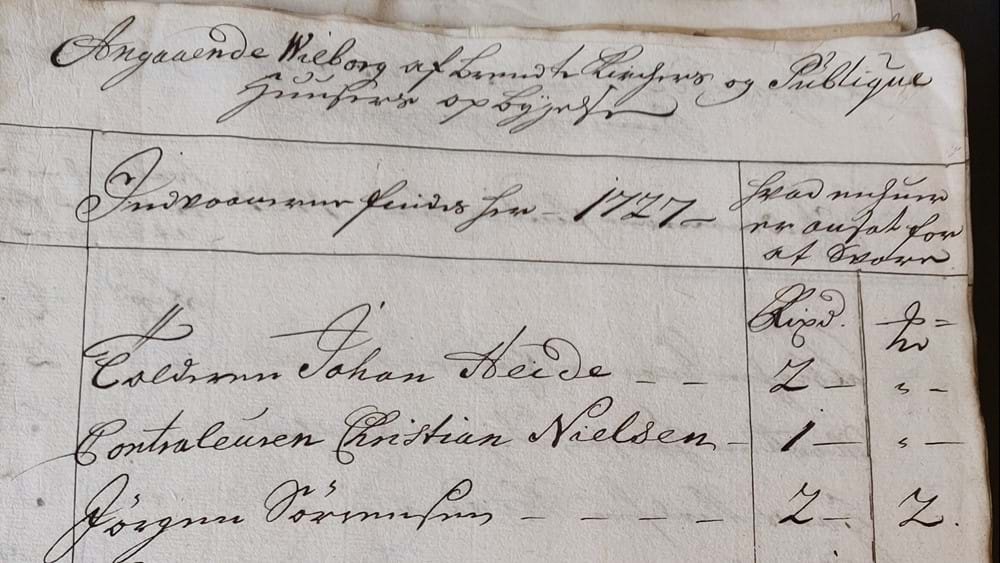 Other Genealogy Sources About the Fires

Remember the reason for the fire taxes: A fire had damaged a considerable part of a town, and the town could not afford to pay the rebuild itself because a lot of its inhabitants had lost their homes. This means that lists of the burnt buildings were made, so if one of your ancestors lived in Viborg or Copenhagen at the time of these fires, you should examine those lists, too.

For Copenhagen, the census of the affected buildings lists many details of value to genealogists: The address, the name of the owner, the name of the tenants (head of household), size of the property, mortgaged amount, and names of mortgagees. Furthermore, a census of the spared buildings in Copenhagen was made. That census lists the address, name of the head of each household, the number of men, women, children, and servants in each household, and the same details for persons or families who temporarily lodged with another family because their own house had been destroyed by the fire. Luckily, these censuses have been published in a book, which has been scanned into a searchable PDF: Gerhard L. Grove, Kjøbenhavns Huse og Indvaanere efter Branden 1728 [Copenhagen's houses and inhabitants after the fire 1728] (https://soeg.kb.dk/permalink/45KBDK_KGL/1pioq0f/alma99121979760805763). It is a large file, and I recommend that you download it before initiating a search for a name, otherwise your browser might crash.

Brand means fire, and styr is an old word for tax. Other extraordinary taxes were collected from time to time.

The three taxes mentioned in this blog post are only some of the taxes collected. If you are up for reading a Danish article about taxes in Denmark from about 1660 to the early 1900s, I recommend this one, which is available online: Carl Christiansen, Om Amtsregnskaberne som historisk Kilde [About the County Financial Accounts as a history Source] (https://tidsskrift.dk/fortidognutid/article/view/117048 : accessed 2 April 2022); citing the periodical Fortid og Nutid, vol. 4 (1923): 1-37. Click the "PDF" button at the cited website to read the article.

What does the Danish word udvandring mean?

What does the Danish word tegnelse mean?

What does the Danish word supplik mean?